Intrust Funding is a Yakima commercial lender providing private money loans to investors in Yakima County. Acquire your next property, renovate your next investment, or cash-out refi your last loan today. With funding in 48 hours, no inspections, no appraisals, and a simple 1% per month interest rate, Intrust Funding is real estate investing simplified.

The real estate market in Yakima has everyone talking, especially in the private lending world. We fund real estate investors looking for a Yakima project to fix & flip or buy and hold. Many of our borrowers, who are also members of Bigger Pockets, follow the BRRRR method for producing long term wealth and passive income. Intrust Funding provides short term loans that range from 5 to 12 months. Our application process is simple and transparent. And we can disperse funding for investment projects within 48 hours of approval. Quick loan payoff combines with quick investment profit. We make real estate investing easy.

As Yakima’s leading money lenders for residential, our rehab loans are accessible to new and seasoned investors alike! If you have bad or no credit, that doesn’t matter to us. However we do need a credit report, or a copy of a credit report issued within the last 12 months, just to make sure there are no liens on any collateral you might use. We also need proof of funds for the down payment. To prequalify for a rehab loan from us, that’s about all we need. But an investment property with no septic in place, is selling at in-person county auctions, or does not have a free and clear title with no liens will not typically receive a hard money loan from Intrust Funding. Furthermore, we do not fund land-only deals, unless the land value is equal to or exceeds the loan amount. Many investors use our private money loans to acquire a property, renovate an investment, or as a cash-out refi from another lender. All fees, like origination fees, are rolled into the loan, while a ballon payment is due at the end when the investment property is sold, rented out, or refinanced, allowing our competitive rates to match or beat other hard money lenders in Yakima County. Similarly, our flat 1% interest rate per month attracts investors all over Washington state. At Intrust Funding, we provide cash on hand, hard money loans, with no money out of pocket, to investors in the city of Yakima.

Sometimes hard money loans are called bridge loans. This is because bridge loans act as bridges between quick, short-term and long-term financing. Investors looking for bridge loans in Yakima, Washington, trust Intrust Funding to give them the best deals in Yakima County.

For Yakima real estate investors who need hard money to fund both the acquisition of a property and the renovation costs, Intrust Funding’s Yakima rehab loans roll up everything into one loan, for your convenience.

Today, fix and flips are all the rage. One reason for this trend is the way seasoned investors leverage hard money to fund fix and flip projects. Let us help you out on your next Yakima fix and flip with our hard money loan!

If you need to refinance a hard money loan for an investment property in Yakima, we fund cash-out refi loans every day. Whether you need a longer loan period, want to cross-collateralize investments, or more, our Yakima cash out refinance loans are for you.

The BRRRR Method is a real estate investing strategy where an investor will Buy, Rehab, Rent, Refinance, and then Repeat this cycle to generate value quickly in their real estate investment properties portfolio. For commercial real estate investors in Yakima, Intrust Funding has become a popular money lender on BRRRR projects.

Yakima is a city in and the county seat of Yakima County, Washington, and the state’s 11th-largest city by population. As of the 2020 census, the city had a total population of 96,968 and a metropolitan population of 256,728. The unincorporated suburban areas of West Valley and Terrace Heights are considered a part of greater Yakima.

Yakima is about 60 miles (100 kilometers) southeast of Mount Rainier in Washington. It is situated in the Yakima Valley, a productive agricultural region noted for apple, wine, and hop production. As of 2011, the Yakima Valley produces 77% of all hops grown in the United States. The name Yakima originates from the Yakama Nation Native American tribe, whose reservation is located south of the city.

Yakima County is a county in the U.S. state of Washington. As of the 2020 census, its population was 256,728. The county seat and largest city is Yakima. The county was formed out of Ferguson County in January 1865 and is named for the Yakama tribe of Native Americans.

The unincorporated suburban areas of West Valley and Terrace Heights are considered a part of greater Yakima. Other nearby cities include Moxee, Tieton, Cowiche, Wiley City, Tampico, Gleed, and Naches in the Upper Valley, as well as Wapato, Toppenish, Zillah, Harrah, White Swan, Parker, Buena, Outlook, Granger, Mabton, Sunnyside, and Grandview in the Lower Valley

Yakima has seen the job market increase by 3.4% over the last year. Future job growth over the next ten years is predicted to be 40.1%, which is higher than the US average of 33.5%.

Interstate 82 is the main freeway through the Yakima Valley, connecting the region to Ellensburg and the Tri-Cities, with onward connections to Seattle and Oregon. U.S. Route 12 crosses northern Yakima, joining I-82 and U.S. Route 97 along the east side of the city. State Route 24 terminates in Yakima and is the primary means of reaching Moxee City and agricultural areas to the east. State Route 821 terminates in northern Yakima and traverses the Yakima River canyon, providing an alternate route to Ellensburg that bypasses the I-82 summit at Manastash Ridge. 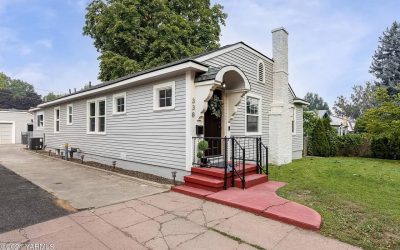 Look no further this is the home you’ve been waiting for! This bungalow style home is completely remodeled and features 3 bedrooms 2 baths with a detached 1 car garage. Nestled next to the Yakima canal and on a dead end street this classic home has everything you need. Walking in you’ll see the open floor plan with lots of windows for natural light. Notice the white wainscoting in the formal dining room that takes you right into the updated kitchen. New stainless steel appliances, quartz counters, white cabinets with herringbone backsplash. The master with two closets and a barn door taking you into the attached bathroom. Downstairs you’ll find a large bedroom and the laundry room. New roof, plumbing and hvac system. Hurry this one won’t last long!