Intrust Funding is a Tacoma commercial lender providing commercial loans to investors in Pierce County. Acquire your next property, renovate your next investment, or cash-out refi your last loan today. With funding in 48 hours, no inspections, no appraisals, and a simple 1% per month interest rate, Intrust Funding is real estate investing simplified.

More than ever, real estate investors are finding great opportunities in the city of Tacoma. Bigger Pockets has made the BRRRR method a popular approach for real estate investors to generate passive income and accrue long term wealth. With our private money loans, investors have tremendous success at fix and flips and buy and holds in Tacoma. Intrust Funding provides short term loans that range from 5 to 12 months. With an easy, transparent, and quick application process, Intrust Funding can provide funds for investments within 48 hours of approval. That means buying properties quickly and repaying loans in no time. Real estate investing has never been easier.

As Tacoma’s leading money lenders, our commercial real estate loans are accessible to new and seasoned investors alike! Prequalifying for a short term loan from us is simple. Although there is no minimum credit score you need to have, we must have a credit report or a copy of a report issued in the last 12 months on file. This is just so we can make sure there aren’t any liens on collateral you might use for the loan. The second thing we need is a proof of funds for down payment, or proof of adequate collateral. Once we have those two things, that’s about all we need! But an investment property with no septic in place, is selling at in-person county auctions, or does not have a free and clear title with no liens will not typically receive a hard money loan from Intrust Funding. Furthermore, we do not fund land-only deals, unless the land value is equal to or exceeds the loan amount. Many investors use our commercial loans to acquire a property, renovate an investment, or as a cash-out refi from another lender. All loan fees are rolled into our loans, meaning investors only pay a 1% interest rate each month until their loan is payed off. A balloon payment is due at the end of the loan term, which is typically paid off through the sale or refinance of the investment property. Our competitive rates are appreciated by commercial real estate investors in Pierce County. In the city of Tacoma, Intrust Funding provides rehab loans for real estate investors looking for a quick cash in hand deal.

Sometimes hard money loans are called bridge loans. This is because bridge loans act as bridges between quick, short-term and long-term financing. Investors looking for bridge loans in Tacoma, Washington, trust Intrust Funding to give them the best deals in Pierce County.

For Tacoma real estate investors who need hard money to fund both the acquisition of a property and the renovation costs, Intrust Funding’s Tacoma rehab loans roll up everything into one loan, for your convenience.

Today, fix and flips are all the rage. One reason for this trend is the way seasoned investors leverage hard money to fund fix and flip projects. Let us help you out on your next Tacoma fix and flip with our hard money loan!

If you need to refinance a hard money loan for an investment property in Tacoma, we fund cash-out refi loans every day. Whether you need a longer loan period, want to cross-collateralize investments, or more, our Tacoma cash out refinance loans are for you.

Tacoma is the county seat of Pierce County, Washington, United States. A port city, it is situated along Washington’s Puget Sound, 32 miles southwest of Seattle, 31 miles northeast of the state capital, Olympia, and 58 miles northwest of Mount Rainier National Park. The population was 219,346, according to the 2020 census. Tacoma is the second-largest city in the Puget Sound area and the third-largest in the state. Tacoma also serves as the center of business activity for the South Sound region, which has a population of about 1 million.

Tacoma adopted its name after the nearby Mount Rainier, originally and locally called Takhoma or Tahoma. It is locally known as the “City of Destiny” because the area was chosen to be the western terminus of the Northern Pacific Railroad in the late 19th century. The decision of the railroad was influenced by Tacoma’s neighboring deep-water harbor, Commencement Bay. By connecting the bay with the railroad, Tacoma’s motto became “When rails meet sails”. Commencement Bay serves the Port of Tacoma, a center of international trade on the Pacific Coast and Washington’s largest port. The city gained notoriety in 1940 for the collapse of the Tacoma Narrows Bridge, which earned the nickname “Galloping Gertie”.

The city is several miles north of Joint Base Lewis–McChord, formerly known separately as Fort Lewis and McChord Air Force Base.

Tacoma has seen the job market increase by 1.8% over the last year. Future job growth over the next ten years is predicted to be 39.9%, which is higher than the US average of 33.5%.

Tacoma’s system of transportation is based primarily on the automobile. The majority of the city has a system of gridded streets oriented in relation to A Street (one block east of Pacific Avenue) and 6th Avenue or Division Avenue, both beginning in downtown Tacoma. Within the city, and with a few exceptions, east-to-west streets are numbered and north-to-south streets are given a name or a letter. Some east-to-west streets are also given names, such as S. Center St. and N. Westgate Blvd. Streets are generally labeled “North”, “South”, “East”, or “North East” according to their relationship with 6th Avenue or Division Avenue (west of ‘Division Ave’, ‘6th Avenue’ is the lowest-numbered street, making it the dividing street between “North” and “South”), ‘A Street’ (which is the dividing line between “East” and “South”), or 1st Street NE (which is the dividing line between “East” and “North East”). This can lead to confusion, as most named streets intersect streets of the same number in both north and south Tacoma. For example, the intersection of South 11th Street and South Union Avenue is just ten blocks south of North 11th Street and North Union Avenue. 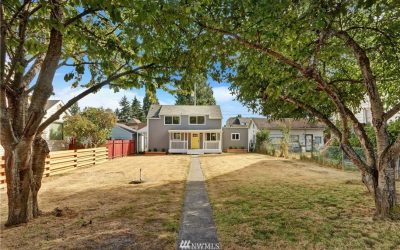 This house is set in the back of the parcel giving it a beautiful front yard to enjoy along with its porch. Parcel is fully fenced making it great for pets and additional privacy. This home features three bedrooms upstairs with a view of Mount Rainier to enjoy from the master bedroom along with one full bath. Come see this house today in south Tacoma’s upcoming neighborhood with easy access to shopping. 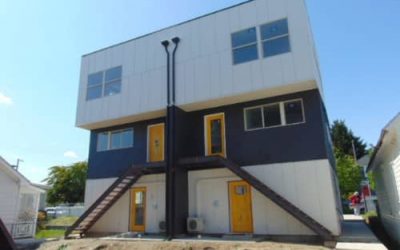 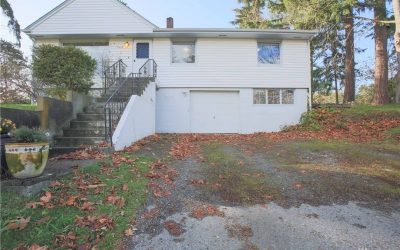 1950’s, 1 story w/ basement home. With the basement providing an extra 1056 Sq Ft of space, the house also includes 3 bedrooms and 1.5 bathrooms. Beautiful hardwood flooring throughout the living and bedrooms. With over half an acre lot!